Three years ago, I studied abroad in Norwich, England, as most of you who know me probably are aware, because I talk about it all the time. It wasn't until this past year that I actually began to see some of the people I had met there again, but even still, those friends I saw were other Americans who were also studying abroad. Finally, one of my British friends, Menna, came to stay with me last week in her travels around the world. What follows are a few excerpts from my journal entries about that week.

I felt transported into this magical realm of England again for the whole 2-hour drive back to Tucson, through all her stories of people I knew once and people I'd never met in a country I love but could barely remember. She had to refresh my memory on quite a lot of the British slang, but after those first few hours, apart from a stray word here or there for the rest of the week, I was mostly re-acclimated to both the accent and the vocabulary.

Meanwhile, a strange thing happened within me as the week progressed. I saw my hometown (and, later, my home state, as we drove across most of it) through a foreigner's eyes, and she thought it was beautiful- stunningly so, to the point where everything looked as though it ought to be part of a "holiday" rather than everyday life- "and you live here!" she kept exclaiming. At one point both Mariah and I told her that she ought to just move here and be our third roommate, and though she said, "Don't tempt me," she also said that part of the point of traveling was to make her appreciate going back home again. It was a beautiful world, but when it comes down to it, the place where you grew up (for her, Ealing, London) is the place you know, with the people you love... and that's what matters. Most of the world eventually settles in one location and lives the majority of their lives there, and it's really just a phase that some of us have to go through, to travel the world and discover the beauty of coming back home again.

This was a theme for me this past week, as I reflect on it now. Honestly I didn't quite expect to ever see any of my British friends again, and here I was, sitting in Dennis Weaver (now James D. Kreigh) park with Menna, eating Chipotle and watching the sun dip over the mountains I know better than my own backyard. Even stranger was when we went to Nogales, which I remembered to be strictly touristy, but once we broke away from the haggling markets and explored the city itself, I realized that it was definitely Mexico. The store fronts looked the same, the bright colors and the run-down buildings, the kids playing in cardboard boxes in the streets, the perros running amok without owners, the beggar women and their ninos wrapped in traditional blankets on the side of the street, the broken sidewalks and loud salsa music emanating from nearby apartments, if you can call them that... it was all so much like Oaxaca that I felt like I was back there, except I was with my British friend from a completely different lifetime, speaking to some of the little kids in Spanish to persuade them to take a picture with her (to their utter delight). It was absolutely disorienting, the hodgepodge of memories attacking me all at once. I persuaded a few of the border officials to give Menna a stamp on her passport even though she didn't need one, and in exchange they made us both turn around so they could check out our butts (which, I said, summed up my experience with the men in that country in a nutshell). We paid $5 for a picture of both of us wearing sombreros and sitting on a donkey, bought a few souvenirs, got asked if we were from Hollywood and/or were supermodels in a very familiar marketing ploy (I wonder if it ever works?), and turned around and went home again. 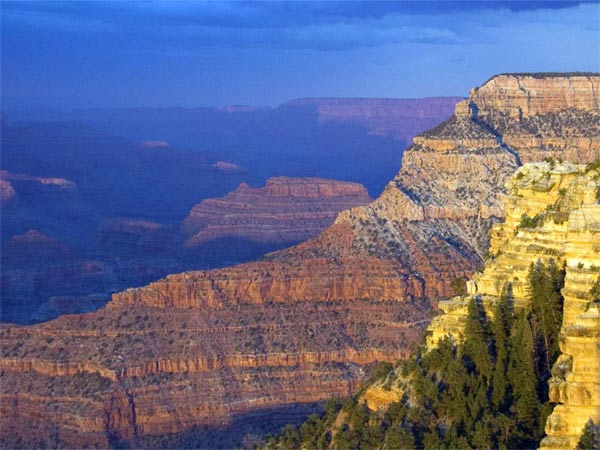 Then I drove for like the last two days straight. We got to the Grand Canyon, both started laughing when we saw it because it was so amazing, and watched the sunset there. We got a motel in Flagstaff on Route 66, had dinner in an Irish pub there, somehow managed to sleep through the train whistles all night long, and had breakfast the next morning in a cafe that Dane recommended. We had coffee at Late for the Train, and then drove to Sedona yesterday around noon, stopping frequently to take pictures. I also didn't remember Sedona - there was a short hike to a stream embedded against a sheer cliff of red rock that was absolutely stunning, and a chapel built into the side of a similar cliff face that we had to jog to see because we were running out of time, but Menna had a lump in her throat at the sight of it, and I had to pull her away in the interest of making the plane on time. We hit Phoenix right at rush hour, and Menna got to the airport a bare half hour before her flight left for LA. She called me from the LA airport, though, to say that by some miracle, she'd made the plane. (I had been praying the whole way.) As of 10:30 this morning, she should have arrived in Fiji. I already miss her."

The moral of all of this? These are the sorts of things I do when I'm traveling, not when I'm in my hometown (or home state, at least). And why not?

It simply strikes me as ironic that it took a friend I met on my travels years ago to teach me to appreciate home.