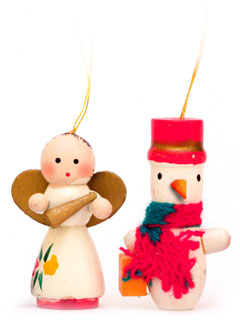 A couple of Christmases ago I was at a holiday shop in the mall looking for tree ornaments for gifts. I chose an angel with apple-red, dimpled cheeks and a snowman with a bright orange carrot nose and made my way to the counter to stand in line to pay for my selections.

I listened as three nerve-frayed women, mothers of preschool children, complained about the shortage of elves. Shortage of elves? That was news to me. My two sons are grown, and at the time had no grandchildren, I supposed I was "out-of-the-loop."

"Excuse me," I ventured. "What do you mean 'there's a shortage of elves?'"

The first woman smiled and explained. "There's a fad going around. During the month of December, each child is supposed to have a personal elf. When the child goes to bed, the elf... " Here the woman crooked her fingers in bracket-like quotation marks." ...plays devilish tricks and brings small presents to the child."

The second woman chimed in. "The tricks aren't supposed to be anything malicious, just impish. And the presents are really just small tokens."

"And each child has his own elf?" I asked.

"I have three children so I had to get three elves," the first woman confirmed.

The third woman, who'd remained quiet up to this point, rolled her eyes and said, "If you ask me, it's just another way to commercialize Christmas and let stores make more money."

When I reached the lady behind the checkout counter, I asked her about this latest trend.

She pursed her lips and nodded. "I'm afraid so... we can't keep elves in stock." She shrugged her shoulders as she wrapped my angel and snowman. "Go figure."

I laughed. "What will they think of next?"

As I walked out into the mall and down the corridor to the food court, my mind churned: devilish pranks? Daily presents? That didn't sound like the Christmas spirit. The question repeated itself. What will they think of next?

Well... I have a suggestion... a tradition we did with our boys until they left for college... and they still talk about it today. In our tradition, the Christmas spirit is focused on Heavenly actions and daily presents for others.

Before my first son was born, I made an Advent Calendar from felt, rickrack, yarn and sequins. I used a pattern I found in a craft magazine from the 70's. The calendar's background is white, and a green tree is appliquéd to the top three quarters of the material. At the bottom are three rows of eight small pockets, numbered one to twenty-four. A small felt piece, shaped like an ornament and decorated with sequins and a piece of Velcro stitched on the reverse side, is tucked inside each pocket. An angel is in pocket twenty-four and she is placed at the top of the tree on Christmas Eve, signifying the coming of the Christ child.

Beginning on December first, each morning the boys took turns placing an ornament on the tree. Also in the pocket, I placed two small pieces of paper rolled up like scrolls and tied with different colored ribbons. In our house, green was for Joseph and red was for Andrew.

On each paper, I had written a sentence that told the "gift" that child was to give to honor Jesus that day. Here are just a few of these gifts:

These are just suggestions; you can adapt them to fit your child's needs. The gifts can be as general or as specific as you like. Also, if you don't have time to make your own Advent Calendar, there are many lovely ones available in stores and catalogs. The "scrolls" can be placed in a jar, tied with each child's particular color of ribbon if there are pockets for them on the calendar itself. The most difficult part for me was coming up with twenty-four meaningful "presents" for each child to give. I worked on these during the month of November and placed all the scrolls in the appropriate pockets on the night of the 30th when we hung up the calendar.

I began each son when he was three and they both delighted in the daily ritual. It was the first thing they wanted to do each morning. I've shared our tradition with others and several families have adopted it as theirs, too.

All of us get caught up in hectic Christmas activities that move us far away from the true Spirit of Christmas. God gave us the greatest gift we'll ever receive: His only Son Jesus Christ. We need to pass on that Spirit of giving to our children. We need to remind ourselves of this original, precious gift.