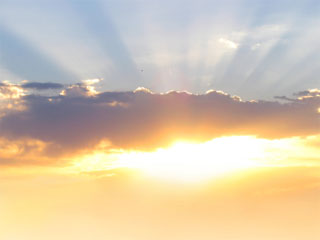 Henry David Thoreau once wrote: "The mass of men lead lives of quiet desperation." Thoreau wrote this sometime back in the 19th century, but it is perhaps a good description of many of us today. Walker Percy in his novel, The Thanatos Syndrome' describes society in America as a "people who seem to be living lives which are good by all sociological standards..." yet "somehow seem to be more dead than alive." It is frightening to find this kind of deadness on the faces of commuters on a train or bus, for example, or see it on the faces of shoppers in the mall. But what is most frightening of all is when we see it on the face we encounter in the mirror. If this is true - and it certainly seems to be - we are prompted to ask if our era is the era of the living dead. This is perhaps a harsh way of describing our times but there do seem to be many in our times that appear to be physically alive but yet are spiritually, emotionally, and intellectually dead.

When this happens, when we find ourselves bereft of anything to be ardent about, meaninglessness can begin to seep into our lives which in turn can lead to separation, alienation, and ultimately to despair. Alienated, we can so easily become detached from our basic beliefs, whether profane or religious or moral and eventually from our very selves. Life then becomes meaningless and meaninglessness is the ground in which drug abuse, teenage suicide, crime, and a host of other evils are rooted. And we certainly have plenty of that around today.

Jesus was always talking about life; the gospels are replete with what he said about it. "I came that they might have life", Jesus said, "and have it in abundance." All too often some Christians have taken these words of Christ and made them refer to the other side of death. But that was not what Christ meant; Jesus was talking about the present life, he meant life in abundance here and now. One of the church fathers long ago warned his listeners: "Do not deceive yourself with idle hopes that in the world to come you will find life if you have not tried to find it in the present world." And St. Irenaeus, a second century bishop and theologian, added his thought when he said: "The glory of God is the human being fully alive." To be fully alive - wasn't it for this that we were created? Wasn't it to this goal that Christ pointed the way? Ah, but the sad fact is that many of us have lost our way.

And so we might ask: what does it mean to be Tully alive' in the way that Christ meant it. Obviously, it isn't simply to be able to breathe. Nor do I think we will find it in a whirlwind of activity. To be Tully alive' means that we live out of the deepest core of our being, the most intimate part of oneself, the place where we are most truly ourselves. But, sadly enough, this is not easily achieved. In fact, when we consider the distractions our culture imposes on us; it may be hard to imagine that such places even exist. So often we glide along the surface of life listening more, for example, to the media which tells us what we should desire and embrace in life and what we should fear and reject. The problem here is that the more we listen to such voices, the less we listen to the small interior voice that asks: "Is that all there is - there must be more to life." And, unfortunately, our culture will respond to our question with its siren song: "Yes indeed, there is infinitely more - more things to obtain, more pleasures to experience, more fun to seek."

And our world does offer pleasures and distractions too numerous to count; this is where the problem lies. Can these pleasures and distractions really satisfy the deep hunger that gnaws away at our souls? How many of us spend much of our time glued to a TV set watching the news or the stock market report or, even worse, some vapid movie or soap opera? How many of us go to church and recite a religious creed which really doesn't mean much to us or in which we may no longer believe. Playing golf at the country club, playing bridge in the living room, pretending interest in a meaningless job, even saying "Have a nice day'' without a centimeter of thought behind it - it's just a nice thing to do; these and many more, are just some of the meaningless ways we may use to fill our lives, our attempts to avoid the pain and suffering associated with separation and alienation.

Mountain. In this book -really Merton's autobiography - Merton describes himself as a "complete twentieth century man" who, as we all must know, abandoned his literary life in New York to become a Trappist monk. Merton later wrote about this move: "What I had abandoned when I left the world' and came to the monastery was the understanding of myself that I had developed in the context of civil society - my identification with what appeared to me to be its aims... the image of a society that is happy because it drinks Coca-Cola or Seagrams or both and protected by the bomb."

Perhaps the most telling example of our attempts to avoid meaninglessness in our lives is the way we place so much emphasis on the idea of having, of owning, of manipulating, of controlling; this tendency extends itself to material things as, for example, amassing wealth. It often will extend to controlling people. Perhaps this is one reason why obsessive compulsive disease is so prevalent today. Many feel they must use these ways to attain a never-ending mode of self-actualization without a thought to the psychological price they will pay for a life of unrestrained pleasure. They often become very selfish people who want to hold on to what they have at all costs.

But having' is almost always an illusory source of meaning. Eric Fromm has written: "If I am what I have and what I have is lost, who then am I?" We can only speculate, but it may have been Fromm's thought which influenced Thomas Monaghan, the founder of Domino's Pizza to say: "None of the things I've bought, and I mean none of them, have ever really made me happy." And Mr. Monaghan spent a quite considerable fortune on "having". His 'having' included among others, three houses designed by Frank Lloyd Wright, 30 vintage automobiles; he also owned the Detroit Tigers baseball team. He owned them and many other possessions until he finally decided the spiritual, intellectual, and emotional price was too high a price to pay to hold on to them; he got rid of them. "Having" had not been a source of meaning in his life.

One has to find meaning in his or her life in order to be happy, to live life in its fullness. Just as a spider constructs its web, so we must construct meaning in our lives; we need to do this to survive, to find happiness. This is to say that we seek meaning and also create it in the circumstances in which we find ourselves. We do this as we seek to discover the purpose of our lives, to discern the truth of our experiences. We look within ourselves to probe the mystery of meaningfulness in our daily lives. And we attempt to give meaning to what we see there.

Psychologist and philosopher Victor Frankle, who is somewhat of an expert on the subject of meaning, has said: "Meanings are inexhaustible. We need to develop our intuitive sense that allows us to smell out meanings hidden and dormant in life situations."

Spirituality allows meaning to flow into our daily lives. This is the fuel in our search for truth, our struggle for justice. Our acts of love constantly create patterns of meaning to nil our lives and enable us to comprehend the significance, the meaning of our days. And the meaning we find is not one meaning, a kind of cosmic meaning, for all. There is only the individual meaning each of us gives ourselves. It is our task to find, to discover that meaning and to share it with others.