The Life Train Is Rolling 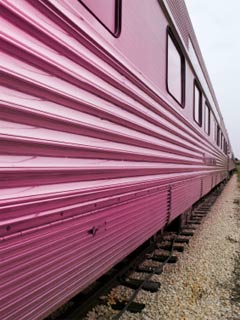 Several years ago, Saint John the Evangelist Parish in Stamford, in conjunction with the Diocese of Bridgeport, chartered a train to Washington, DC, for the annual March for Life. We dubbed it "The Life Train" and filled it with passengers from Stratford to Danbury to Greenwich – more than 500 in all.

I still have one of the large "Life Train" medallions that were distributed on that occasion. Many people told me how much they enjoyed that train ride. Naturally they appreciated the opportunity to stretch their legs and to go for coffee and snacks along the way. What they enjoyed most, I would submit, was the opportunity to pray together and to strengthen the camaraderie of the whole Bridgeport pro-life delegation.

Unfortunately, we have never been able to stage a repeat performance. Try as we might, Amtrak has not been able or, we think, willing to charter a train for this purpose. As an avid user of the railways, I am disappointed. But that won't stop us from trying again in the future.

Nor has it stopped us from attending the March for Life. This year, the diocese chartered several buses for pro-life advocates who made the trip from Fairfield County to Washington. In addition, a number of parishes also chartered buses and some parishioners traveled on their own. I was especially proud and happy to see so many of our young people at the Verizon Center in Washington, where more than 20,000 young people, together with bishops, priests, and religious, gathered for an annual Rally for Life and Mass. So numerous are the young people who wish to attend this event each year that the Verizon Center isn't large enough to hold everyone. So there are alternate sites, including the D.A.R. and Saint Matthew Cathedral.

The night before the March for Life, I also attended the Vigil Mass for Life held at the Basilica of the National Shrine of the Immaculate Conception. As usual, it was packed. The largest Catholic church in the Western hemisphere, which easily seats 4,000 people, suddenly seemed small.

As an alumnus of Catholic University and as the chairman of its Board of Trustees, I was especially proud and happy to see so many university students (identified by their t-shirts) participating in the Mass and helping the pilgrims from all over the country, many of whom spent the night at the Shrine.

Every year when I take part in the events surrounding the tragic anniversary of Roe v. Wade, I have the same strong impression: the Pro-Life movement is young and vibrant. In saying this, I am not making any unwise short-term political predications, nor am I claiming that the majority of young people are pro-life. My observation is simply that that Pro-Life movement itself is young, has staying power, and is making steady progress no matter what urgent issues may surface in any given election cycle.

Perhaps it's because more than a few young adults have begun to look at the question of abortion differently from some of their elders. Growing up in a society where nearly 3,700 abortions occur daily, they sense the tenuousness of life.

Young people have told me that they easily could have been numbered among the 45 million innocent lives lost to abortion in America since Roe v. Wade was decided in 1973. They also know other young people who have procured an abortion and who have suffered in the aftermath. They do not see working for the full legal protection of the unborn as a "conservative" or "liberal" issue, nor even as a partisan issue, but rather as a matter of fundamental justice.

The bishops of the United States agree.

A little more than a month ago, the bishops of the United States issued once again a document called Forming Consciences for Faithful Citizenship: A Call to Political Responsibility. It is issued every four years as we enter into national elections. This year, however, the document took a different direction from previous years. While it continues to discuss the many issues that deeply affect our country and our world, this year's edition stresses the importance of properly forming our consciences to vote.

This means more than burnishing our party affiliation or focusing on narrow self-interest. Rather, it means sharpening our consciences so that we may clearly perceive the moral dimensions in party platforms and in the positions taken by candidates for political office.

This is not a question of improperly mixing religion and politics or of imposing our religious faith on others. While our faith helps us more readily and deeply to grasp the fundamental dignity of the human person from conception until natural death, this bedrock truth is in fact accessible to human reason. It must be the foundation of every civilized society. In any case, both as believers and as citizens, we have the right and responsibility to be heard in the public square and to uphold fundamental human truths and values at the ballot box.

In that light, Faithful Citizenship recognizes the bright line that exists between those things that are intrinsically evil (evil by its very nature and thus always and everywhere gravely wrong). This includes the taking of innocent and defenseless human life as well as euthanasia and assaults upon the family such as so-called "same-sex marriages."

Voting for a candidate precisely because he or she is in favor of abortion (or some other intrinsic evil) is also gravely wrong; it entails formal (intentional) cooperation in the evil of abortion. Yet even if we vote for candidates in spite of their support for abortion, we are undermining the common good and further weakening the fabric of our society.

In our evaluation of party platforms and candidates, we should ask questions such as these:

Lest you be discouraged and think that the prolife movement is spinning its wheels, I'd ask you to consider the progress which conscientious citizens have been able to make in the past few decades. Polls indicate that a majority of Americans now tend to be pro-life. The number of abortions per year continues to decline; 1.2 million abortions (2006) is still a massive loss of human life yet we should remember that in the early 1980s over 3 million abortions were performed annually. There are now more pro-life pregnancy aid centers than abortion clinics.

The Supreme Court upheld the ban on partial birth abortion and some think it could overturn Roe v. Wade. A headline in last Sunday's Connecticut Post recognized that "Abortion Rights (sic) Are Fragile."

There is enormous work to be done, but let's not forget to thank God for what has been achieved and encourage one another as we move forward.

Thinking about the wonderful young people who gathered in Washington to express their support for the intrinsic value of human life from conception to natural death should inspire us to build a culture of life, a truly humane society in which the most fundamental right of all – the right to life – is deeply respected and protected.

Only when that happens will America be true to herself.