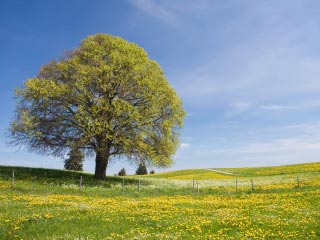 Around the year 1260, St. Thomas Aquinas was in a monastery near Naples. Outside of that monastery, there was total chaos in society, an epidemic was sweeping the area. People were dying by the hundreds. Starvation was a way of life. Unemployment was rampant. The town was practically disintegrating. During that period, St. Thomas Aquinas, the greatest mind in the Catholic Church, wrote an article on the subject of trust in God. In that article he gave directives so that those who develop the quality of trust in God would get a quality that those outside his monastery never had. And it was the quality of serenity. When there is chaos in our life and confusion is rampant, if we develop a deep sense of trust in God, serenity will come into our way of life.

If St. Thomas were alive today, considering all the problems that our society is confronting, he would ask us to study deeply his work on the subject of trust in God. Look around us and just see what is happening. We have a stock market that probably will go into a recession. We have a war in Iraq that will take the lives of hundreds of our young men and women. We have an unemployment problem that is growing and we see millions of people throughout the world dying by the minute from AIDS. St. Thomas Aquinas would ask us today to really learn what the subject of trust in God is all about.

When you talk about the subject of trust in God, you have to recognize that there are many things out of your control. Personally you cannot do too much about the war, personally I cannot do that much about a recession. And so we have to conclude that there are many factors way beyond our control. If, for example, you look at trust in God and the subject of serenity, you find in the organization of men and woman in Alcoholics Anonymous a group of people who will tell you that they had to believe in a higher power to help them gain the serenity they needed to overcome alcoholism. That is why they have their beautiful serenity prayer, "God, grant me the serenity to accept the things I cannot change; the courage to change the things I can; and the wisdom to know the difference".

Serenity is that which God gives those who have trust in him. Serenity is a derivative of trust in God. If you go back into the history of the Catholic Church or the history of your own parents, you can see how trust in God has played a tremendous role. For example, remember the wise men who came to visit Christ who had to travel by a star to find Christ. Don't you think that took trust? Just look at Mary and Joseph how they had to take flight into Egypt because King Herod was going to kill their son. So they took off in the middle of the night into a pagan land where neither one of them was know and basically hated because they were Jewish. Just go back into the history of some of your parent's grandparents. If you read the book called "Manifest Destiny", the author tells you about the difficulties men like George Washington, Thomas Jefferson and John Adams had in developing this country into the great country that it is. They had to have trust in a higher power. They had to hope during the difficult years of forming our country that God would never abandon them. And God never did. That is what trust can bring.

If you go back into the history of your own parent's ancestors many of whom came from foreign countries without two nickels to rub together and they took part in the building of our Church and the building of our country. Trust is a mysterious virtue. Many people when they talk about it never seem to get a concrete definition of what it is all about. Just go back into your own childhood days. You could ask your parents questions that they really could not answer. Yet you grew up knowing that life was going to be filled with unanswered questions and problems that oftentimes had no solutions.

The generation of the future, your children, if serenity is to be part of their lives have to be taught that having a closeness to God, having a deep sense of trust in God, will give them a reward of serenity and peace of mind that they can get in no other way.

If you look back into the history of our universe or our world, we all know that in some time in history God created the sun and the moon and all the galaxies and they have been operating perfectly for billions of years. There has never been a mistake. When God brought you into this world giving you all the talents he gave, he also knew that there would be challenges you would experience and have to face on a daily basis. To make sure those problems that God gave us were resolved and answered, each one of us had to develop a greater sense of truSt. If you go back into the history of the Gospel, Christ said over and over again, "look at the lilies of the field and the birds of the air, they neither reap nor sow yet your heavenly father takes care of them. Aren't of much more important than the birds of the air and the lilies of the field?"

We know that during his sacred suffering Christ uttered the words, "not my will be done, but yours, O God". That is the same mentality that has to be ours when suffering or any cross come into our lives. Trust reminds us that God never gives us a burden that we cannot handle. If you go back to the beginning of this year, you might recall that all throughout our country millions of people made all sorts of New Year's resolutions. Some are going to lose weight, some are going to give up something, some were going to do more exercise. It is estimated that by the time two months has gone by over 80% of those resolutions are broken. If you want a happy New Year, I would strongly suggest that through your prayer life you develop a greater sense of trust in God. That kind of a resolution will not only give you the peace about which Christ spoke, it will also give you the serenity that so many people lack.