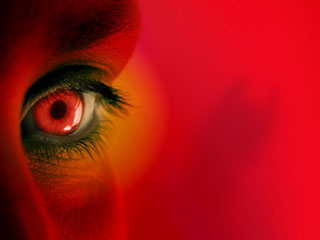 Back in those years the viewing public found Geraldine to be hilariously funny, and I think I know why. It was because we could see a part of ourselves graphically portrayed in her. Most of us would not actually say, "the devil made me do it." But we do find ways to explain and excuse ourselves when we know that our behavior has been inappropriate. There is, of course, a grain of truth in Geraldine's explanation. We cannot use the devil as an excuse for our ethical and moral failures. Surely we all recognize the dishonesty of that. But at the same time we know that there is something in this world and in ourselves that entices us to evil, that is, to do things that we know we ought not do, and to leave undone things that we know we ought to do. What is this strange allurement? Where does it come from? How do we deal with it?

The New Testament calls it temptation and reminds us that Jesus himself had to wrestle with it. There is a passage in the Gospel where it tells us of a time when he was "put to the test by Satan." That is literally what the word temptation means – to be tried, to be proven, to be tested.

That it really means is that Jesus is one of us. Temptation is a universal human experience. The book of Genesis tells us that it started in the Garden of Eden with the first man and first woman. From that day to this, there has never been a person who has not felt the enticement of evil. Anyone who has never been tempted would simply not know what it means to be human. So the temptation of Jesus is a badge of his humanity. It means he is one of us. It enables us to relate to him and him to relate to us.

In a letter to the Hebrews, it speaks of Jesus as a great high priest, and then describes him like this, "We do not have a high priest who is unable to sympathize with our weaknesses, but one that was tempted in every way that we are. So let us confidently approach the throne of grace to receive mercy and to find help in time of need."

It also means that his character was a moral achievement. Sometimes we treat the divinity of Jesus in such a way as to remove him from the arena of struggle. We think of him as if he were a heavenly robot that God had programmed in advance to always do the right thing. If this were true, it would mean that the goodness of Jesus wasn't really goodness at all.

More than two dozen years ago there was a big scandal in our country concerning television game shows. If I recall correctly, the scandal focused primarily on two programs. One was "The $64,000 Question," and the other was "Name that Tune." An investigation revealed that the big winners really were not any smarter than anyone else. They had simply been given the answers in advance. In other words, the contest really wasn't a contest. It was a sham, just a show put on to entertain the public.

If the divinity of Jesus means that he was a heavenly robot, programmed in advance to always do right and never to wrong, than his goodness falls in the same category. It really wasn't goodness at all. It was a performance. It was a show. It was a sham. But if we take his temptation seriously, than we can believe that his goodness was real. It was not automatic. It did not come easily. The beauty of his life was the consequence of a hard fought moral victory. The temptation of Jesus means that his character was authentic. It was genuine. It was real.

All of this really means – with the temptation with Geraldine and with robots and with authenticity and with humanity – is that we should be compassionate to ourselves and with one another. If the Lord is sympathetic toward our weaknesses, surely we should be sympathetic with the weaknesses of other people. Let me conclude with a little poem, the author of which I do not know. I do hope it says it all.

"Don't find fault with the man who limps

And stumbles along the road,

Unless you have worn the shoes that he wears

Or struggled beneath his load.

There may be tacks in his shoes that hurt,

Though hidden away from view;

And the load he bears, placed on your back