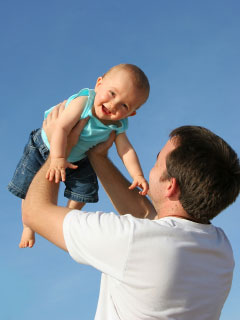 This month all throughout our country the father of the home is being honored. When you go back into the history of the Church, we have an older tradition in the fourth commandment that says, "Honor thy father and mother". These are the fathers in the past who have worked long hours, who have gone off to war to defend our country, who did their very best to become what is called the "greatest generation". It is very easy to talk about dead beat fathers, those who don't pay alimony or child support, it is very easy to mention that 67% of all the children from single parent families end in some serious conflict with the law. Any one can give you negative figures and negative stories about fathers who have failed in their vocation. But when you look around, when you recall your own fathers and the fathers from other families, you might recall that the vast majority of fathers from the past and present have done a great deal for their families, for their Church and for their God. We honor the men today who gave us a value system that has helped us wherever we went. We honor the fathers today who gave us principals and convictions to live by. There is no doubt the father who teaches a son to play baseball or takes the time to teach a son how to play golf, should not go unrecognized. But what we recall today in the memories of our own fathers and the fathers of the present are men who handed down a value system based on integrity, based on honesty, based on a love of God and a love of man.

These are the values that have shaped our lives and these are the values that often come from our own fathers. There is no question about it, we know the vast majority of time the children have to spend with their mother, but we also know there are many fathers, who because of the complication of job styles, do not have that opportunity to spend that much time with their children. But when you look around your community and this country, as fathers they can remind us of St. Joseph, the foster father of Jesus Christ. St. Joseph was always there when his family needed him. He had to take his family on a distant flight into Egypt, into a land that was totally anti-Semitic and he himself was Jewish. Every Church writer has used St. Joseph as a model of fatherhood, a model of justice and a model of responsibility.

Our children have grown up for years looking at television situational comedies. If you analyze most of them, the father was always in these situation comedies, a second class citizen. He was the last one whose opinion was asked of anything serious. Even when we look at the repeats of I Love Lucy with Lucille Ball or Bringing Up Father with Danny Thomas, it was always the father who was considered the country bumpkin, the necessary clown to have around to be the object of comments that try to create him as a bewilderedly, leaderless person. We all laughed at many of those situational comedies, but they really did not too much for the vocation of fatherhood if you analyze them.

There is a great story that should be told frequently about fathers and it is the story of Cardinal Minzenty when he was in charge of Hungary during the communist regime. One day he came out to sue his automobile that had a driver in it. All the communist agitators surrounded the car and practically tried to throw it over. He got out of the car and looked at all the communist followers and said, "men of Hungary, I am just an ordinary cardinal of the Roman Catholic Church, inside this car is a man who has five children and his children need him". We can say to every father, your children need your wisdom, they need you to listen to them. Have you ever figured that out of 1440 minutes the average husband and wife speak to each other about 12 minutes a day in substantial communication? Have you ever considered the fact that the average father and mother speak to their children in the form of substantial communication about 7 minutes per day? These children who have had no fatherly direction really need their fathers. Your children need you as a father. How will you know if you are an ideal father? The ideal father is one whose is conscious of trying to do everything possible to live up to the commandment of God that reminds him that father's should be deserving of honor. He is the one with the sense of communication and commitment and tries to do the best for the wife he married and the children he has. He is one who realizes that he cannot be a tyrant, but must be a leader that he must correct with charity and discipline with love. He is the one who realizes his family needs him and in their minds there will never be another like him. How will you know if you are a successful father? If your family after your death, refers to you as "our father, who are in heaven, hallowed be his name", you are certainly a father who walked worthily in the vocation to which God called you.