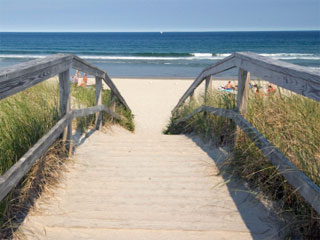 The town of Westport is numbered among those high-priced communities located along the Connecticut coastline. I had the good fortune of spending most of my youth there. Throughout my high school and seminary years, summers were spent laboring for the family construction company. But in my tender years, prior to the age of being pressed into service, my summers were blissful and serene. Building scaffolds, mixing cement, and hauling bricks in the heat and humidity were tasks yet unknown. Summer meant the beach. Most mornings, a small number of friends and I would gather and either be driven the few miles to one of the local beaches or we would hop on our bikes and ride there ourselves. A happy day in the sun, sand, and surf ensued.

Even as a young boy, I felt the mystery of the sea. Each experience of being there was a time marked by discovery. Wading into the water treated your feet to sensations of hot sand, cool mud, sharp stones, seaweed tickling your toes, and, on occasion, something alive - the pinch of a crab or the touch of a passing fish. Swimming underwater was a particular joy. You had a great view of the terrain and could spot the best place to stand. No matter how hot the air temperature was, the water of Long Island Sound always was cold. Vigorous swimming soon sensitized your body to your watery environs. Oddly, I felt at home among the endless waves. The ocean became a place to loose your self and to think deeper thoughts. Something within the windswept clouds, the blue skies, and the lapping of the waves transported you to an almost mystical time and place. Tranquil and meditative, I sensed a profound, spiritual feeling of a fundamental truth. Yet, the world is still the world. Even here, the need for caution arises. Is that a Portuguese Man-of War shining on the waves in the distance? Am I going to step on something dangerous? Have I drifted away from my place on the shore?

Decades have passed. I seldom go to the beach. When I do, I drive by the places I knew as a boy. Little has changed. There is something eternal and marvelous about the scene. The sea remains a steady guardian of a young boy's past and a ready reminder of the spiritual feeling of being in the presence of an eternal verity. Like an angel of God, the sea and shore inspire, assure, and reveal.

To no surprise, the first chosen apostles were men of the sea. They drew their livelihoods from the depths of the unknown. They knew the sea in both its placid and tempestuous states. In the eyes of Christ, they were individuals who could become fishers of men. In following Christ, they would be introduced to dimensions of spirituality far beyond anything they could have conceived. These men would be challenged not only to plumb the depths of the mystery of the person of Jesus, but also to discover their own individual strengths and weaknesses. Perhaps, Peter, as a career fisherman, would fallback on the experience and skills of his former trade to unveil the meaning of his mission and of his new identity. He knew the importance of patience and of perseverance in the application of his trade. Peter was aware of the uncertainty of success as he pulled in the net that had been cast into the deep. He appreciated the contribution of teamwork and the necessity of interpreting his environment. From his days offshore, Peter must have drawn on that spiritual consciousness bestowed by the sea to the thoughtful. His apostolic mates would have shared that experience. Indeed, hauling in nets, separating the contents, navigating the boat, and all of the pelagic tasks soon would become remote memories, but the lessons taught by a life on the sea would not fade and would find application to their new lives.

As always, Peter was the focal point of Jesus' challenge of ministry. A momentous event forever illustrated the power of Christ working within his primary apostle. Late at night on a stormy sea, Jesus walked upon the water in sight of the terrified apostles clinging for life in a tempest tossed boat. In response to his impetuous request of Jesus, Peter stepped from the boat and he too walked upon the water. In order to do so, Peter had to hold fast to his faith in the Lord. This realization confirmed much about Peter's hope in Jesus and much more about the potential Peter possessed within himself.

Something special between God and human beings meets at the sea. Standing on that narrow sandy line between the known and the unknown, a person is invited to ponder the unchanging ocean and to wonder about his or her own destiny. There is a feeling that the individual is a participant in the unfolding story of existence. He or she is a vital part of the everlasting. On the beach, contemplating the sea, one senses the touch of God's hand and the truth of the need to hang onto that hand if one is to journey successfully through life to eternity. E. E. Cummings once remarked, " it is always ourselves that we find in the sea." Yes, ourselves and the Holy Spirit in ourselves.