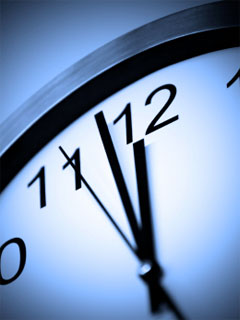 One of the most important commodities God has given to us is the quality of time. Both the Old and New Testament constantly referred to this commodity as one of the most precious qualities God has given us. We are taught from an early age never to waste food, never to waste anything. We should be equally taught that one of the tragedies of all our lives is the amount of time that we waste. If you study the Old Testament, there is a Hebrew word "yom", which means day, week, month or century. But, in the Bible it says very clearly that God used seven days to create the world and then He rested. He then said, "This is a good world".

That is why when you read the writings of St. Paul, he is very clear, we have a purpose on this earth and time helps us achieve this purpose. So he said, whether you eat or drink or sleep do it for the honor and glory of God. That is our purpose. That is why God gives us so many years of time so we can give him honor and glory.

Another aspect of how we waste time is by carrying a grudge. When you think of all the people whom you have met throughout life who are carrying a grudge or some hurt that could have taken place years ago and they fail to recognize that in the carrying of a grudge they are wasting this precious commodity called time.

When you think of the life of Christ, His whole life was filled with reminders to us of the value of forgiveness for each other. He said we must forgive those who trespass against us. We must be willing to forgive them seventy times seven and to everyone at the moment of our death, Christ gave us a reminder when he said, "Father, forgive them for they know not what they do".

This element of forgiveness is something that teaches one has to individually foster if this world is going to be the way God wanted it to be. What is the value of harboring hatred or carrying a grudge? We know we are supposed to follow a Christ who carried a cross instead of carrying a grudge.

When you analyze our life, we have so many ways that our time is being wasted. Five years standing in a line. Two years waiting for traffic lights to change. One year looking for a misplaced set of car keys. All of this covers the life span of someone 70 years of age.

Our life, if it is to be the life that God and Christ wanted it to be, must be directed to doing the things that Christ wanted us to do when he said, "when I was hungry you gave me to eat, thirsty you gave me to drink, naked and you clothed me." He was reminding us that there are people on this earth who are in need of the help that can only come from us. This is how we honor and give glory to God. If we ignore these people, if we bypass them, then we are committing the tragic waste of the quality of time that God wants us to use in a most profitable fashion. Time is fleeting. Do not allow it to pass by you without giving honor and glory to God.