What I Did for My Summer Vacation 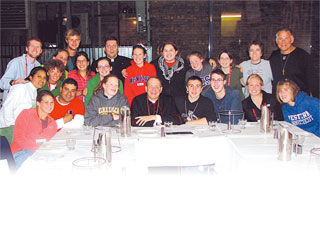 It's hard for me to believe that summer is passing so quickly. Maybe I'm just getting older, but the time between Memorial Day and Labor Day seems to be getting shorter every year, especially this year. It could be, of course, that this perception is helped along by the extraordinary events I've been privileged to witness during these summer months. All these events were Church-related and most of them required a bit of work on my part. If they weren't exactly "vacation," they were the sorts of things geared toward inner renewal. And isn't that the real goal of leisure?

As I approach the altar for Mass and spend time before the Blessed Sacrament, pleasant memories of those days come back to me, days spent with people from all over the world gathered together by the Eucharistic Lord.

The second major event was World Youth Day in Australia. Truth to tell, I wasn't sure I was ready for such a long trip. Although many people in Fairfield County regularly travel to far-flung places because of their work, I seriously questioned whether or not I should go.

I'm glad I decided to make the trip. Of course, going from New York to Los Angeles and then immediately boarding a plane from Los Angeles to Melbourne meant 25 to 30 hours of continuous flying. And because we were heading west, it seemed to me we had entered upon a never-ending night. Try as I might, I just couldn't sleep that long! Happily, however, that long night soon gave way to a truly light-filled experience!

Before heading to Sydney I spent a few days in Melbourne— a clean and beautiful city with a European flavor. I made my way to its beautiful cathedral, Saint Patrick's, to museums and a few shops, and then viewed the surrounding wine country and sea coast. I also attended an excellent lecture at the John Paul II Institute for Studies on Marriage and Family given by the Carl Anderson, Supreme Knight of the Knights of Columbus. The weather was a bit brisk (it's winter Down Under) and was a refreshing change from the summer heat.

After a brief stopover in Adelaide, I spent the remainder of my time in Sydney. As you know, it is a truly wonderful city of six million people, featuring a beautiful harbor that prominently features a legendary Opera House. All around is wonderful architecture including beautiful churches, landmarks, office towers, parks, shops, and restaurants.

But there wasn't much time to linger over any of these. First on the agenda was meeting up with the young people who traveled from the Diocese of Bridgeport to take part in World Youth Day. Thus I quickly found myself on the way to the Australia Zoo, built on the side of steep hill. I took a ride in a funicular train to get to the exhibits and soon met up with Sister Ana and Sister Florencia, Deacon Bruce Roby, Deacon Tim Bolton, and our wonderful young people. We had just started admiring a koala when Tarcisio Cardinal Bertone, the Vatican Secretary of State, and his entourage arrived, including our own Msgr. William Millea. And then it was off to see the Australia exhibit. As far as I'm concerned, it was great seeing those exotic creatures in the zoo, but I wouldn't want to meet up with them in the backyard!

After that brief interlude, it was back to work. I was among the bishops invited to conduct three catechetical sessions with young people as part of the WYD experience. This meant boarding a bus at the crack of dawn and traveling to three different outlying parishes on successive days. Truth to tell I was a little bleary, at least the first morning, until I arrived at the parish and met nearly a thousand young people. They were "warmed up" by a group of young adults. That was followed by my talks on the Holy Spirit, a question-and-answer session, and Mass. The groups with whom I spoke were very diverse, including young people from Australia, New Zealand, Papua New Guinea, several Arab States, and even a few from the U.S.

On the last morning, I was joined by the Bridgeport group which made me very happy indeed. I was impressed by the earnestness with which these young people are embracing the faith, the sincerity and incisiveness of their questions, and their search for something more than contemporary culture has to offer.

The press in Australia, at least at first, did not share the enthusiasm of the youth. Instead, the media used the occasion as an opportunity to vent yet again the Church's problems and its negative feelings about the Church. Yet, as we gathered for the opening Mass with over 100,000 young people, the tide began to turn. This Mass, held at the edge of the harbor, was a beautiful blend of cultures, including the Aboriginal culture of Australia. We were warmly welcomed by the Prime Minister of Australia, who spoke of the importance of faith in public life and thanked the Catholic Church for its contribution to the common good. George Cardinal Pell, the Archbishop of Sydney, was the celebrant and gave a beautiful homily. The response of the young people to all this was at once prayerful and enthusiastic - a witness of faith that began to chip away at even the most hardened and cynical observers.

Of course, WYD moved toward its crescendo when the Holy Father arrived on a boat in Sydney Harbor and then proceeded to pray with and address a huge crowd of young people. That night I met a fine group of men from various College Councils of the Knights of Columbus for dinner and then went to a parish (somewhere in Sydney - I know not where!) for a screening of a film on the life of Francis Xavier Cardinal Van Thuan, a saintly Vietnamese bishop who spent years in solitary confinement because of his witness to the faith. On that occasion, I was deeply touched to meet the late Cardinal's sister, Agnes, who lives near Sydney.

The following day I enjoyed taking our Bridgeport group to dinner and then presided at a Eucharistic healing service at the "Life and Love Site" sponsored by the Sisters of Life and the Knights of Columbus. It was basically evening prayer and Benediction. However, I was asked to bring the monstrance to the edge of the sanctuary as people came forward to pray. They prayed intensely. Some gently placed their hands at the base of monstrance; others simply caught hold of my humeral veil. All were seeking the Lord's mercy and healing in their lives.

The next day, Francis Cardinal George of Chicago celebrated an outdoor Mass for nearly 15,000 young people from all parts of the U.S. and also gave an excellent homily.

As World Youth Day proceeded, young Catholics from around the world continued to transform a very secular city into a city of faith. They were a joyful, enthusiastic, and wonderful model of how to have a really good time without getting into trouble. By the time a group of young actors staged the Stations of the Cross at strategic points in the center of Sydney and shared a vigil of prayer with the Holy Father, that transformation was nearly complete.

Along the way, the Holy Spirit was hard at work transforming the hearts of young pilgrims and calling many to priesthood and consecrated life. I am sure that the Holy Spirit also touched the hearts of many adults, renewing in them (as the Psalmist would say) the joy of their youth. The finale of World Youth Day was the Papal Mass at Randwick Racecourse, an enormous place that accommodated half a million worshippers. I hesitate to tell you, however, that on the morning of the great event, I was like "wrong-way Corrigan." Opting not to take the bus with the other bishops, I found it was impossible to get to the bishops' vesting site in time for Mass. I had an alb but couldn't get the Mass vestments. A nice local priest loaned me his stole so that even without my "wedding garment" I found a spot from which to concelebrate the Mass. I'm glad I did. The Mass was truly beautiful as the Holy Father spoke of the Holy Spirit in the Christian life and then confirmed 24 young adults. The Mass was reverent, joyous, and made of this vast crowd a true community of faith and prayer. Joy overflowed as Pope Benedict announced that the next World Youth Day will take place in Madrid in 2010 (By the way, it's not too early to start getting ready for that great event!).

As I pen this vacation travelogue, I'm again in Quebec for a few days, this time for the Knights of Columbus Convention where the theme is "Building a Civilization of Love through Charity, Unity, and Fraternity." This theme is based on the Supreme Knight's best-selling book which attractively presents the thought of John Paul II and Benedict XVI on the dignity of the human person, the value of life, and the basic principles of the Church's social teaching - and shows how we can apply that teaching in our daily lives. Likewise, in this "Year of Saint Paul," the Knights, following the lead of Saint Paul himself, are stressing the primacy of charity in the Christian life.

It is always a joy to gather with my brother Knights and their families, as also with the priest-chaplains of the Order. The annual convention is a wonderful opportunity to be renewed in the principles of the Order which are charity, unity, fraternity, and patriotism. It also draws us into the wonderful works of the Order for the common good of both the Church and society at large. Indeed, I cannot think of another organization that speaks more clearly and does more good than the Knights of Columbus. I am especially happy with the work the Knights are doing to help men be good spouses and fathers, to defend life and to protect the institution of marriage, and to promote vocations to the priesthood and consecrated life.

Yes, the summer of 2008 is sweeping by. In fact, I may need a rest from this leisure! And I will make a retreat before summer comes to an end. I do expect that these experiences will prove a blessing not just for me but for many as the busy fall season gets under way. Of course, summer or winter, near and far, you are never far from my thoughts and prayers.