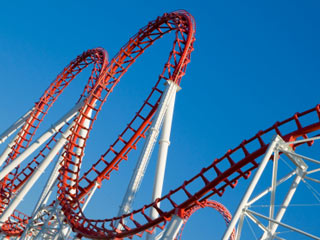 Advertised as the fastest ride in the world, the giant roller coaster gleamed majestically in the mid-morning light. Like a metallic mountain range, it towered over all of the other attractions in the vast amusement park. The owners of the entertainment facility made every effort to beautify their main attraction. Their creative appointments and the decorative scheme made the ride truly a thing of beauty. The colors, lights, and facades gave it a sense of style and grace. Beyond the purpose of its construction and design, the roller coaster possessed a fundamental allure.

Crowds of eager customers poured through the entrance ways. Many slowed to inspect the colorful tattoo stamped on their hands to show that they had access to all of the park's offerings. The summer season was nearing its end; a fact that made the attendees all the more enthusiastic. Soon, the big coaster welcomed the first visitors of the day. The anxious riders carefully placed themselves onto the seats of the little train that would whisk them to their highly anticipated adventure. Nervously, they awaited the sudden jolt of the car that signaled the beginning of the ride. Some breathtaking minutes later, the speedy conveyance brought its tussled and thankful passengers to the end point. Although windblown and a little worn for wear, the elated passengers made their way to the exit and off to their next destination. There barely was sufficient time to bid them farewell before the coaster greeted a new group of thrill seekers.

Daylight surrendered to night and the park was closing, the roller coaster had provided happiness and fun to hundreds of riders. Bathed in moonlight, the graceful beauty somehow felt unfulfilled and abandoned. All the riders had their good time and then went away. But a new day would arrive and others would rush to the roller coaster and fulfill their desires. Indeed, a new day would come, but so would a new night.

As you may suspect, the roller coaster is a metaphor. The personified amusement park ride represents the spiritual and emotional void marking the current sexual mores. There is a fear that sex has been reduced to a mere instinctive, animalistic activity. Human satisfaction and fulfillment reflect a harmony between an individual's desires and God's intentions. If this assertion is true, it suggests that in the area of human sexuality there is something missing or discarded that must be found.

Some months ago a survey on the topic of happiness was conducted by the Associated Press and MTV. Nearly thirteen hundred people ranging in age from thirteen to twenty-four were asked to rank what in their lives brought happiness. The most important source of happiness was found in the experience of time shared with family. After family, time spent with friends and then time spent with a significant other followed in succession. Regarding sex, the thirteen year old to seventeen year old group revealed that an active sex life led to less happiness. The eighteen year old to twenty-four year old group reported that sexual activity produced more happiness at first, but it did not last.

Let nothing be lost, said our Savior.
But that is lost that is misused.
– William Penn

The proper use of any human capability must be consonant with all of the qualities of being human. The Church has developed an entire theology of the body to illustrate the synergism of mind, body, and spirit. God intends all human relations to be demonstrative of the love shared by God and each individual. What a daunting challenge this is for any human being. Yet, it is not only precisely what is called for in human interaction, but also what any person would desire from a personal or business relationship. Disjoin the action from the will of God, the personal conscience, and the dignity of the other person and there one finds raw sin. Consider what is at the bottom of all of the misery in the world and I suggest that one would discover that very characteristic. Conversely, join the act to faith, self-examination, and good will and there one encounters grace. True human sexuality is a representation of the desire to please God in the unity of one's hopes, dreams, struggles, joys, and sorrows intertwined in a marriage of love.

In the final analysis, the moral code regarding sexual intimacy displays the full measure of what constitutes complete human beings in relation to one another and to God. Sex becomes integrated into a covenant of authentic love and not relegated to a superficial ride on an emotional roller coaster.