Seeing the Sunny Side of Pro–Life 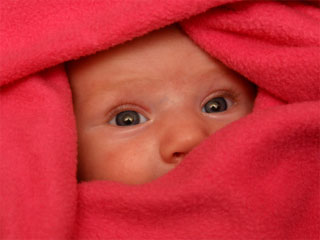 December 2007: The reception hall at the Boston Marriot grows silent as Marianne Luthin takes the stage. She commands her audience's attention by simply brushing aside her hair and shifting her glasses. Close to three hundred members from the Women Affirming Life Organization wait for her to speak.

"We as women should be building a culture of life! A culture where each and every human life is seen as an unrepeatable human life!" The crowd nods and cheers in approval and earnestly waits to hear more. Once Miss Luthin finishes her speech, a noticeable serenity is reached throughout the hall – a serenity created through Miss Luthin's ability to fully reconfirm and satiate every single audience member's beliefs.

Marianne Luthin. 53, has a group of pro–life devotees who literally adhere to her speeches and work like gospel. But there are two sides to every issue, and along with anti–abortion advocates, Luthin has pro–choice supporters who denounce her ideas. But whether people like her cause or not, Miss Luthin is doing something that seldom even hope to carry out: she is acting on her beliefs, and professionally so. She has dedicated her life to the controversial pro–life cause (in Massachusetts no less, an openly liberal state) and shows no signs of stopping.

The year was 1972. Luthin, 17 at the time, lived in Brighton, Massachusetts right around the comer from a women's help center. However, this center was soon turned into an abortion clinic, and Luthin was appalled from the get go.

"I could see the suffering these women carried with them when leaving [the abortion clinic]," she says softly.

Some people, like Miss Luthin, could be negatively affected by living so close to an abortion clinic. A few might change the situation by going to the polls and voting for pro–life referendums. Others may forget about the issue all together. Not Marianne Luthin. This event in her life was the end all be all — she knew she had to take a stand professionally promoting the pro–life issue.

"The contrast between the centers put everything into perspective for me. It forced me to confront the reality of abortion. I knew something had to be done, and I was going to do it."

At a young age, Luthin found her life's calling and was not afraid to act on it. However, the question remained as to where she would take her stand on the pro–life issue. Would she stay in Massachusetts — a state known to be open to abortion? Or would she take her ambitions elsewhere, to a state where abortion laws are restrictive? To Miss Luthin, the answer was simple: she would stay in Massachusetts because she was up for the struggle.

"I understand that in many other places, this complicated issue is treated with respect." she states. "You get people who are angry with you here [in Massachusetts] but I have come to see the pain of too many of those who. I believe are, in a sense, victims."

Miss Luthin's work dates as far back as 22 years ago. In 1986, Luthin. still somewhat ripe as a pro–life advocate, debated all over Massachusetts against the state funding of abortion. She states that the debate turned into a "misunderstanding," which in turn led to one of the highlights of Luthin's professional career. This was one of the first times (of many times, as she would come to find out) that she faced opposition promoting pro–life issues.

"Our cause was for state–wide referendum but it became confusing. Some thought [our cause] was an effort to completely outlaw abortion. It was really to overturn a law to mandate it. Taxpayers would have to pay and support abortion, regardless of their stance on the issue."

The "misunderstanding" created even more tension during this debate between pro–life and pro–choice supporters. Luthin recalls the adversity she. in particular, faced during this time.

"People booed and hissed and shouted nasty comments, but I personally try to take the strongest case for the position I believe in."

Luthin lived up to her word and took her work above and beyond general debating. In 1991, she, fellow pro–life advocates Frances Hogan, Margaret John Kelly, and Mary Ellen Bork and other Catholic professionals went to Washington D.C. to meet with the Pro–Life Committee of the National Conference of Catholic Bishops. It was here that they would explain their new undertaking, an undertaking that was close to their hearts: Women Affirming Life (WAF).

"Women Affirming Life came about with the central idea that women can help each other and help the unborn child and mother." After a brief pause she adds, with authority. "This is our mission. This is what we believe, and Women Affirming Life was created for this reason."

From day one [WAF] was extremely successful and had great support. Marianne was one of the creators of the organization, and was wonderful as a director. She always handled her job with the utmost respect and composure. She put her heart and soul into her work."

By 2001. Marianne Luthin was fast becoming one of the most outspoken women in Massachusetts. As a director of Women Affirming Life, she took her cause to the national level. She was making her voice heard, regardless of stalking potential from followers or lack of popularity from opponents. However, these two pro–life notches on Miss Luthin's professional belt were about to be outdone by a new achievement. Massachusetts' Cardinal Sean O'Malley appointed Luthin as the new Director of the Pro–Life Office for the Archdiocese of Boston, one of the highest positions a pro–life supporter can have in the Catholic Church. Dr. Helen T. Jackson, a pro–life advocate and a founding member of Women Affirming Life, knew Luthin was the right person for the job.

"Marianne is excellent in her position as Director for the Pro–Life Office." Dr. Jackson states. "She's a great writer and speaker, she organizes well, she knows the facts, and she's not afraid to speak up. Her devotion is limitless."

But with this achievement came pressure – the pressure to find new ways to make Massachusetts (a state, according to statehealthfacts.org. with nearly 25,000 abortions in 2004) more eager to sympathize with the pro–life cause. Again. Ltithin acted on what she believed, and her knowledge of the subject helped her advocate for her cause.

She knows the facts off the top of her head.

"There are 1.2 million abortions every year. 1 in 4 pregnancies end in abortion. 1 out of 3 women of childbearing years have an abortion. This is a huge issue and no one seems to be talking about the pain and regret that comes with it. My colleagues and I want people to talk about it. We want to inform people first, and then change can be made."

So inform they did. As Director of the Pro–Life Office for the Archdiocese of Boston. Luthin and her colleagues run a crisis pregnancy center and assist in Project Rachel, a worldwide program.

"Project Rachel," Luthin proudly claims, "is an outreach effort of the Catholic Church around the world to assist women and men who are feeling grief over the participation of abortion."

Miss Luthin has emphasized Project Rachel and "the grief of abortion" as something that can equally affect both men and women. Luthin believes that if people understand how much men can suffer after an abortion, the issue will become more prominent in the state. Her newest goal is to open up this little–known facet of abortion to the public.

"Some men encourage their wife or their girlfriend to consider abortion because they think they will not be able to deal with having a child." she states. "But in many cases, these men come to Project Rachel and find it hard to cope with their situation. Another group of men feels the same pain because they can't help their unborn child. People don't usually associate men with abortion, but it can affect them almost as severely. People need to know about this; I'm trying very hard to shed light on this situation."

There is no end in sight for Marianne Luthin's pro–life advocacy. The devotees and "boos and hissing" aside, Miss Luthin states she will devote her life to anti–abortion views no matter what obstacles she faces. Also, despite the many people that do not share Marianne Luthin's views and the many people who do share her views, mere is one person Miss Luthin knows will always be by her side: her husband Henry. For more than 30 years. Mr. Luthin has helped Miss Luthin tight for what she believes in.

"She's wonderful, and I'm not just saying that because I'm her husband! I help her out in any way I can because at the end of the day, she is fighting for a cause she really believes in. not a cause that she views as controversial. She does what many of us only hope to do: fight for what we think is right." He laughs quietly and then eagerly adds. "And she does it for a living!"