Saint of the Month 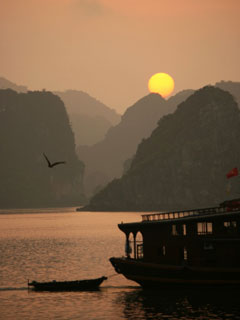 Even as a child in France, Francis Isidore Gagelin exhibited a deep desire to evangelize the world. Francis's pastor took note of the young man's desire to become a priest, and saw to it that he received a Christian education. But before Francis was ordained, he was chosen to join the mission to Vietnam, where the Church had been working steadily for years.

After his arrival in Vietnam, Francis was finally ordained at the age of 23. Filled with joy, the enthusiastic new priest started ministering to the Vietnamese people as he piloted a small boat from one tiny fishing village to the next. "The hardships, privations, and sacrifices of my life here make me extremely happy," he write, believing that this was where God wanted him to be.

The ruler of Vietnam, who at first had welcomed Christians in his land, was becoming alarmed at the rapid growth of Christianity. Though he tried to distract the missionaries with government work, nothing could keep them from evangelizing among the people.

Finally, Minh Mang issued a decree outlawing Christianity and ordering all Vietnamese converts to renounce their faith. European and native priests who refused to do so were rounded up and tortured. Frances and the other priests were dragged throughout the kingdom as they were publicly humiliated for teaching the Word of God. Finally, after months of torture and imprisonment, Francis was condemned to death. He was hanged on October 17, 1833, along with other priests.

Almighty and everlasting God,
we thank Thee for Thy servant Francis,
whom Thou didst call t preach the Gospel
to the people of Vietnam.
Raise up, we beseech Thee, in this and every land
evangelists and heralds of Thy kingdom,
that Thy Church may proclaim
the unsearchable riches of our Savior Jesus Christ;
Who liveth and reigneth with Thee and the Holy Spirit,
one God, now and for ever. Amen.