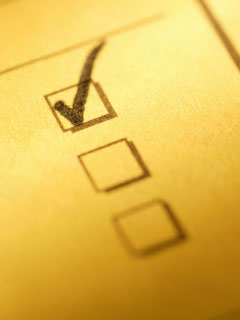 The time has come to cast our vote, to make our choice, to do our duty – to be counted. What does being counted really mean? Are we simply a number added to a column, a part of the mathematics of an election? In the mechanics of the democratic process, we feed a machine with morsels of information that it readily digests. Our hopes and dreams for the future of the nation are transformed into an integer to be aligned with others of like intent. In fact, the vote is our voice, our representative before the nation.

There is another point to the vote. Although it is as singular as the voter, the ballot announces that that voter is a member of a society. Government chosen by the governed is the essence of democracy. Each individual citizen professes a responsibility for the well being of the whole. This responsibility of the citizen indicates the awareness of concerns that are not only parochial, but also national. The fullness of meaning of the motto One Nation under God is suggested here. Thinking of the "other" is equivalent somewhat to thinking of God. As Scripture reminds us, love of God requires a love of neighbor. Thus, the spiritual component must not be overlooked or dismissed when a thoughtful voter decides how to use the vote.

Our age has been marked by the idea of the affirmation of the self above all. The American Dream too often has been viewed as the attainment of various status markers rather than the quest for a virtuous nation.

In the middle of the nineteenth century, religious and philosophical thinkers such as Orestes Brownson, a convert to Roman Catholicism, warned of the deleterious effects of hyper-individualism. The result, they claimed, would be the lack of social harmony and an indifference to humanity in general. The voter may fear that politics would degenerate into an exercise of grasping for power and of fulfilling self-interests. There are many, both past and present, who would claim that this characterization is a most accurate portrayal of the political scene. In the current economic climate, negativity is rampant. One easily could imagine voters of today applying the following graphic criticism of the effect on the American utopian efforts in the eighteenth century by the works of the French socialist, Charles Fourier to many aspects of the current political scene: "This creature of corruption which first began to crawl, lizard-like in the filthiest dregs of Parisian infidelity, and which has never since left any thing, but its slime and venom in the track of its crawling." (American Transcendentalism, Peter F. Gura). Whether on the national or local scene, one can hear comparable sentiments regarding the amount of financial waste and pervasive corruption in government. Even those of kinder feelings wish for a steadier and more responsive ship of state.

In truth, the voter is faced with the daunting task of discerning the best course of action before the amazingly complex processes afoot in developing local and global policies. Compared to the past, the availability of information and commentary regarding the issues that affect American security and overall vitality is extraordinary. A typical voter now is required to search out multiple sources of news in order to attain at least a modicum of, to use a popular motto, fair and balanced information. For the electorate to be able to make an informed choice in casting their ballots, it is necessary to sift through massive amounts of facts and then pray for the wisdom of a Solomon.

In 1200 B.C. the Mycenaen culture fell to invading barbarian tribes and thus Greece entered into its dark ages. Slowly, over centuries, order was restored and in Athens there evolved a system of government known as a democracy. Our brand of that democracy has served us well. Now, we are called to serve it. To the best of our abilities, we summon our spirits, our minds, and our hearts to help fashion the character of a new assembly of governors. We put our trust in the skills and the integrity of elected officials to represent the ideals of this "democratic experiment." In spite of the skepticism and cynicism politics engender, there always are good people doing the best they can for the welfare of our nation. We are prayerful, we are hopeful, and we shall be counted.