Who Is This Man? 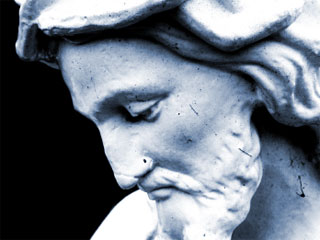 I hear people talking about a man they say is God

How He left His home in heaven and on this earth did trod.

His manner was meek and mild, He was honest, pure and kind

Miracles He performed, healing the sick, delivering the lame and blind.

He said He was the Son of God, that the Kingdom of God was near at hand

The multitudes followed Him to hear His words, for hours they would stand.

"Love your neighbor, forgive your enemies," His message did proclaim

And soon the then-known world were talking of His fame.

But some religious folk said, "Who is this man who talks with such great power?

He is wrecking our religious system!" and their hearts turned sour.

"Away with Him! Crucify Him!" the mob reacted wildly

But the One they nailed upon the cross took it very mildly.

For you see, He is the Son of God, the Lamb for sinners slain

He died to pay the price so that reconciliation we could gain.

But the grave could not hold Him, He met the Father's plan

He arose, He's alive, for evermore to reign, this Son-of-God man.

Who is this man? His name is Jesus, His title is LORD

He is the Christ, the King of kings, the One so adored.

Those of us who know Him, and live for Him each day

To tell you of His love, and that He is coming again soon

The signs are apparent, whether morning,, night or noon.

The warning has gone out, we must prepare our heart

If we want to escape the wrath of God and from this earth depart.

Sin must be judged, at God's pardon do not scoff

While God's love and grace are here, please do not put off.

Resurrection life is yours if you will call upon His Name

Wake up, O sleeper, this is not some religious game.

Confess with your mouth that Jesus is your Savior and Lord

Believe in your heart He is the Son of God and be in one accord.

To fill your heart with joy and peace and cast away the sin.

What an awesome story, every word of it is true

This message comes your way, because God loves you.