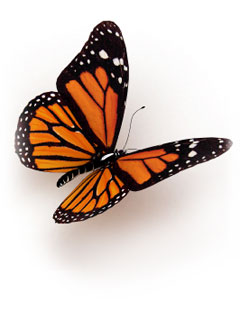 At the beginning of summer my older son arrived at the house with a netted basket, four caterpillars inching around at the bottom. He and his wife periodically order them and then watch as they develop through their life cycle. After the caterpillars complete their transformation into butterflies, my son and daughter-in-law set them free.

"What do you want me to do with these?" I asked as he plunked the basket on the laundry room counter next to where I was folding clothes.

"When they emerge, release them in your garden," he answered.

"But I don't know anything about butterflies," I protested. "I only know how to enjoy them."

"It's simple," he said and proceeded to tell me how to care for them.

The same son, several years ago, gave me a small butterfly garden for Christmas. Family and friends have added gifts of plants, decorative stones, and whimsical statues so that it has now tripled in size from when it began. It is about fifty feet from my office window and has been the inspiration for many of the pieces I've written.

I took the caterpillars and moved them to a spot where I thought they would thrive. In a short time I witnessed these creatures spin their cocoons, hibernate, and then emerge as beautiful Monarchs. Well, three emerged while one remained dormant. As instructed, I soaked a small cotton ball with sugar-water, placed it on a napkin, and then carefully positioned the napkin inside the basket, zipping the top shut when I'd finished. I watched as the three congregated around the cotton ball and feasted. I left them to feed for a while and went to my office to begin my daily writing. A couple of hours later, I came back to find the original three hovering around the top of the container, and the fourth cocoon split and the last butterfly drinking the sugar-water.

I took the basket out to the garden, opened the flap, and watched as the butterflies left the container and then moved from flower to flower until they vanished from sight. All, that is, except the fourth butterfly. He had unfurled his wings, but seemed to do more hopping than fluttering. I prepared him a fresh sugar-water, saturated cotton ball, got a new napkin, and then placed it in the shade under a small leafy plant in the garden. I carefully coaxed him from his basket and onto the napkin.

For the remainder of the morning and the larger part of the afternoon, I watched from my office, unable to concentrate on my writing because I couldn't keep my mind off my little friend and his predicament. I took numerous trips to the garden, but each time he'd only managed to flit from the napkin to a twig, and then from the twig to a rock. I prayed for the Monarch to take flight. I prayed for him not to be eaten by some predator, or to die from his inability to care for himself. Late that afternoon when I checked on him, he was gone.

But my heart was not eased. After spending a day fussing over the creature, I still didn't know if he had finally gathered the strength to fly away or if he had come to some dismal end. I felt terrible that I didn't know where he was. In my heart I knew it wasn't my fault. I'd done all I could. At some point it was out of my hands and up to him to survive on his own. What I did come to understand somewhat better was the parable of the lost sheep, how upset the shepherd was over the one lost sheep even though he had ninety nine present and accounted for. Like the shepherd, my mind was not on the three healthy butterflies, only on the frail one.

The Bible has many references to the weak, assuring God's love and protection for us at all times:

We are all God's creations, each of us with our own specific design, from the gentlest and the most vulnerable among us to the fiercest and most independent. None of us knows God's magnificent plan, or where or how we fit in. What we do know is that He loves us and feels great sadness when we can't, or don't, live up to our potentials.