Light In The Window 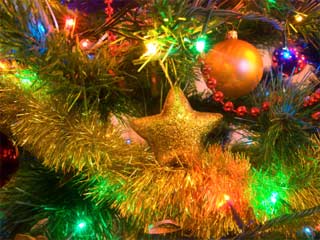 The warm glow of colored lights and the pungent scent of fresh pine evoke the memory of a Christmas night many years ago. Our family room seemed imbued with the tranquil mood of the season. Suddenly, the angelic figure atop the Christmas tree shuddered with the rapid passing of a grey sphere that nicked one of the angel's wings. A moment later, a like projectile collided with a large golden ball hanging near the center of the tree. The shattered remains of the ornament settled at the evergreen's red-blanketed base. I stood near the entrance of the room speculating about what Dickensian nightmare had invaded our home. The noise brought my mother hurriedly into the room. She quickly assessed the damage wrought on that revered symbol of the celebration of Christmas. Visibly upset, my mother's gaze set on the individual lying on the sofa. The case was solved. The weapon: my new toy; the perpetrator: my older brother. For reasons still unknown, my dear, devout brother took my Christmas gift – a pump-action bazooka that fired small plastic balls – and launched an attack on the Christmas tree. Thanks to Mom, peace was restored and joy returned to the world.

Christ, Christians, and Christmas have been subject to persecution from the very beginning. From the emperor worship of the ancient Roman Empire to the self worship of the current Western culture, much effort has been expended in attempting to extinguish the light of Christ. The gospel of love and the high moral principles it calls humanity to espouse are roundly condemned, but the gospel of narcissism and the base immoralities it dictates all blindly to follow are celebrated. Left unchecked, this trend ultimately will remove the civil from civilization. The wheel, however, is still spinning and the outcome is yet uncertain. The egocentric minority is loud, aggressive, and militant, but is still the minority. The time has come for the God-centered majority to break from its complacency and to respond wholeheartedly to a spiritual call-to-arms. This holy muster is directed to all people of good will who wish to support that which leads to moral excellence and to the nurturing of that which is truly good and humane in our nature.

My confession: I am a Jew and every single one of my ancestors was Jewish. and it does not bother me even a little bit call those beautiful lit up bejeweled trees Christmas trees. It doesn't bother me a bit when people say, "Merry Christmas" to me. I don't think they are slighting or getting ready to put me in a ghetto. In fact, I kind of like it. It shows me that we are brothers and sisters celebrating this happy time of year. It doesn't bother me at all that there is a manger scene on display at a key intersection near my beach home in Malibu. If people want a crèche, it's just fine with me as is the Menorah a few hundred yards away. I don't like getting pushed around for being a Jew, and I don't think Christians like being pushed around for being Christians. I think people who believe in God are sick and tired about being pushed around period.

The Word of God becomes flesh in the manner of a child born in a stable. What a masterstroke of divine wisdom. Within such humble surroundings, no one would feel awkward or hesitant to draw closer. The God of revelation was first a God of invitation. Whether situated among the elite or the lowly, all were welcome. The Church – the People of God – continues to be the living embodiment of that same invitation. Ben Stein is correct. Christians are sick and tired of being pushed around. The infant Jesus would grow to be mocked, ridiculed, misunderstood, persecuted, and killed for being who he was. The faithful who bear his name have suffered, as Jesus predicted, a similar fate. Still, the universal invitation to hear the good news, to believe in the Savior of mankind, and to live in his grace sustains. Marked as one, holy, catholic, and apostolic, the Church must proclaim the Truth of that baby, that man, that God whose Spirit dwells within the Church and guides it still.

Christmas is a beautiful season of sharing the hopes and joys of people yearning to reach out in kindness to one another and to rejoice in the God whose mercy and love has revealed itself so poignantly to all creation.

Like a light in the window, Christ beckons us. As a light to the nations, Christ sends us. My fondest wishes that you and your loved ones enjoy a blessed and love-filled Christmas.